You can now watch a recording of our recent Donor Town Hall on our YouTube channel. To watch Serving New York City Women in Need: An Update from our Executive Director Melissa Norden in conversation with Board Member Yasmin Ibrahim, simply click on the button below.

Our Donor Town Hall, held on March 30, was a virtual update on how Bottomless Closet has supported New York City women in need during the COVID-19 pandemic and specifically how your contributions have directly impacted and sustained our clients. Melissa and Yasmin also discuss the most urgent needs of disadvantaged New York City women today, and Bottomless Closet’s plans to address these needs in 2021 as the economy begins to rebound. 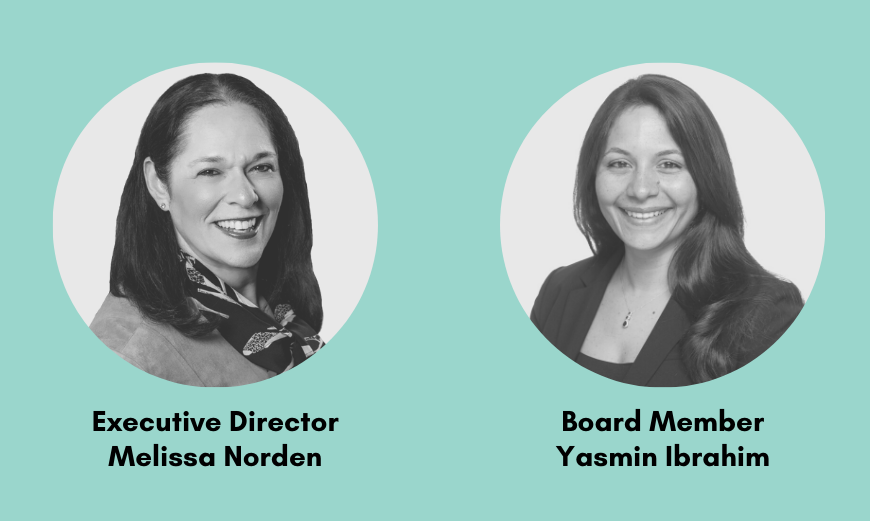 Melissa Norden joined Bottomless Closet as Executive Director in 2016. Prior to joining the organization, Melissa worked at the ASPCA (The American Society for the Prevention of Cruelty to Animals) for 13 years, where she was most recently Senior Vice President, Chief of Staff and General Counsel in the Office of the President. She helped found NYCLASS (New Yorkers for Clean Livable and Safe Streets), a nonprofit dedicated to phasing out New York City carriage horses. Prior to joining the ASPCA, Melissa served as counsel to Madison Square Garden, where she collaborated with the management of the New York Knicks, the New York Rangers and the New York Liberty on the Madison Square Garden Cheering for Children Foundation, raising funds for after-school programs for at-risk urban youth. Melissa is a current member of Tufts University’s Tufts Lawyers Association, the Tufts Nonprofit Group, the Tufts Women’s Group and the Nonprofit Committee of the American Corporate Counsel Association, as well as a former member of the Committee on Nonprofit Organizations of the Association of the Bar of the City of New York. Melissa received her B.A. from Tufts University, where she was named to the Dean’s List with a double major in American History and Spanish. She has also been an alumni interviewer for Tufts University for 20 years. She earned her Juris Doctor from Brooklyn Law School, where she was on The Journal of Law and Policy and received numerous awards for academic achievement. Melissa was admitted to the New York State Bar in 2000.

Yasmin Ibrahim joined the Bottomless Closet Board in 2020, bringing with her over 15 years of international finance, strategy and entrepreneurship experience. She started her career in banking in the Middle East and went on to lead strategy teams at Booz Allen Hamilton and American Express in the U.S, focusing on the financial services sector. In addition to her corporate strategy experience, she is an entrepreneur – founding and operating her own restaurant business in NYC for five years. It is during that time that she developed an intimate understanding of the challenges of employment in underserved communities, particularly for women. She advocated, as a small business owner, for minimum wage policy enhancements. Yasmin is passionate about female professional advancement, mentoring many women as they navigate their careers. She also uses her entrepreneurial and strategy experience to advise startups. As the daughter of Egyptian diplomats, she has lived in a number of different countries and is fluent in Arabic. Yasmin received an M.B.A. from Harvard Business School and also holds a B.A. from the American University in Cairo.